Born To Be A Soldier: The Life of General George S. Patton, Jr.

General George S. Patton, Jr. attended the Virginia Military Institute (VMI) and West Point, participated in the 1912 Olympics, and led troops in two world wars. Between 1916 and 1945, Patton saw combat in Mexico, Europe, North Africa, Italy and Europe again.  According to General Eisenhower, Patton was “an ideal combat leader, whose name struck terror at the hearts of the enemy.” Join Virginia War Memorial Education Director Jim Triesler, as he explores the life of a man “born to be a soldier,” 77 years after his sudden death.

Although free, register early for this ONLINE ONLY event:  vawarmemorial.org/events 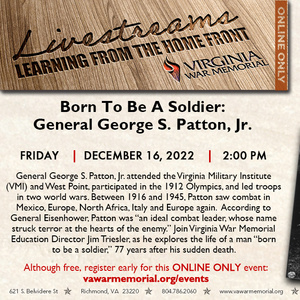