Dogtown Dance Theatre, like most performing arts organizations and venues, shut its doors during March 2020 in the wake of the COVID-19 pandemic. It’s been an extremely challenging year, maneuvering through new restrictions and government mandates, while still wanting to support Dogtown artists and serve the mission to provide a home for dancers.

After what seems like a very long year, Dogtown is finally proud to announce its first limited capacity in-person performance scheduled for April 30 and May 1, 2021.  In the return of the Dogtown Presenter’s Series, Dogtown Dance Theatre is excited to host The Daniel Nagrin Celebration: A Concert of Solos by the Rebel of Modern Dance presented in coordination with the Daniel Nagrin Film, Theatre and Dance Foundation. Alongside the limited in-person performances, the show will also be available on Dogtown’s new digital platform, Dogtown STREAM.

Daniel Nagrin’s career as a dancer, choreographer, and teacher spanned over five decades:  from the world of Broadway where he was once voted Best Male Dancer, to films, solo concert artist, and university professor at Arizona State University.  He was associated with modern dance founder Helen Tamaris and co-directed the TAMARIS-NAGRIN DANCE COMPANY.  He later directed THE WORKGROUP, an improvisational dance company.  Mr. Nagrin is the creator and performer of an extensive solo dance repertory which he toured from 1957 throughout the United States, Europe, and the Pacific.  He received numerous grants and awards from the National Endowment for the Arts, The New York State Council for the Arts, and Arizona State University among others.  He received honorary doctorates from the State University of New York and Arizona State University, and was awarded one of the first $20,000 fellowship awards for Master Teacher/Mentors by the National Endowment for the Arts in 1993.  As a Professor Emeritus of Dance at ASU, Mr. Nagrin focused his energies on writing on dance.  His first book, How To Dance Forever, has become a handbook bible for many in the dance profession.

The Daniel Nagrin Theatre, Film & Dance Foundation oversees the estate, historical content and educational implementation of the work of American Modern Dancer and Master Teacher Daniel Nagrin. More information about the Foundation can be found at https://nagrin.org/.

Performers for The Daniel Nagrin Celebration: A Concert of Solos will include male dancers from an impressive line of careers in modern dance. Audiences will enjoy solos choreographed by Daniel Nagrin performed by Paul Dennis, Donald Laney, Shane O’Hara, Matthew Pardo, and Desmin Taylor.

In house and digital 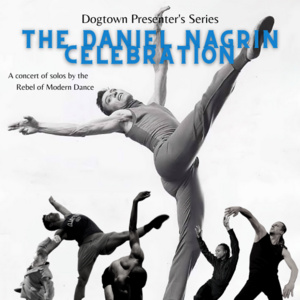