James Ulio, son of an Irish immigrant and Union Army officer, enlisted in the U.S. Army at the age of 18. For the next 46 years, he would dedicate his life to the U.S. military.  He saw service with the American Expeditionary Force during World War I and was the creator of the 29th Division patch. As the Adjutant General of the Army during WWII his mission was to build the force needed to defeat the Axis powers. Join Virginia Army National Guard Command Historian Al Barnes as he explores the life of this distinguished American soldier and his linkage to one of the Army’s most prestigious infantry units.

Although free, register early for this ONLINE ONLY event:  vawarmemorial.org/events 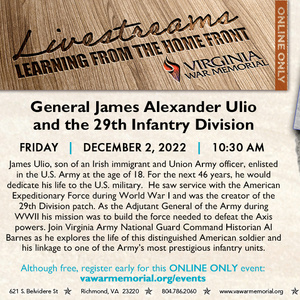