How does Douglass's 1869 "Composite Nation" speech, which argues that diversity and inclusion make a nation stronger, continue to resonate 150 years later? The 2019 Elizabeth Roller Bottimore will feature historian David Blight speaking about “Frederick Douglass's ‘Composite Nation’ 150 Years Later,” based on his book, Frederick Douglass: Prophet of Freedom, which received the 2019 Pulitzer Prize for biography. Dr. Blight is Sterling Professor of History and Director of the Gilder-Lehrman Center for the Study of Slavery, Resistance, and Abolition at Yale University. His 2001 book, Race and Reunion: The Civil War in American Memory (Harvard University Press, 2001), received eight book awards and launched an important sub-field in Civil War studies. It was the topic of his previous appearance as the Museum’s Bottimore lecturer in 1999.

David William Blight, newly named as the Sterling Professor of History, of African American Studies, and of American Studies, is a renowned historian who is considered one of the nation’s foremost authorities on the Civil War and its legacy. 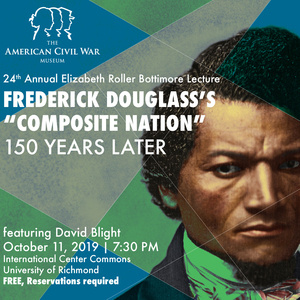