Alanna Airitam: The Golden Age is a tribute to black culture and black histories. In an effort to reframe the narrative of western art history, Airitam reconstructs prominent imagery of power with black men and women. Dressed in vintage garments and adorned with lush fruit and flowers, Airitam’s majestic portraits confront and recontextualize the way African American’s have been perceived and recorded throughout art’s history.

The series is comprised of baroque-esque portraits of African Americans, influenced by iconography from 17th century Dutch Renaissance era, also known as the Golden Age of painting. In ‘The Queen’ a woman rests a key in her palm with a floral headdress illuminated by a Rembrant like light; and ‘Dapper Dan’ pays homage to iconic figures from the Harlem Renaissance who influenced Airitam, such as Langston Hughes and Zora Neale Hurston. Through lighting and subject, Airitam’s images emanate pride and true grace while transporting the viewer to another time, preserving a history. 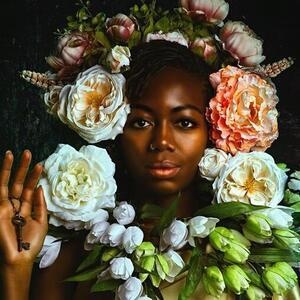