Worlds Apart is a group show by Hernan Murno, Amy Sabrin, Michelle Simoneau and Rosa Vera. These four artists create diverse abstract and semi-representational work springing from the same impulse: the landscape, whether the natural or built environment. Each takes a dramatically different approach to extracting and abstracting the essence of a landscape, but all hope to provoke an emotional response in the viewer.

Their work answers the question, what does landscape-inspired art have to offer in an age when technology permits us to minutely map not only the world we can see, but also what lies beneath the surface of the earth and what can be seen from outer space?  As critic Barry Schwabsky explained, “A landscape painting is not necessarily a representation of a landscape, but rather something that, in being constructed out of pieces of representation, or possibly just echoes of former representations, kindles an experience of its own – one that, as those fragments of resemblance suggest, is somehow like an experience of nature.”

To this end, Hernan Murno’s art reduces the natural landscape to its geometric essence while using colors and forms that evoke a specific locale, often in his native Argentina. Amy Sabrin’s paintings deploy a rich maze of complex surfaces and mosaic-like patterns to conjure the emotional essence of spaces and capture the feeling of wandering (perhaps lost) between spaces, down city streets, or into dead-end alleys, only to make unanticipated discoveries. Michelle Simoneau’s intense focus on her intuitive process produces self-contained universes of light and movement that both delight and disturb. Rosa Vera’s work springs from her emotional experience of a particular landscape and expresses her concern that our natural world is evaporating due to climate change and other human interventions.

Karen Commings’ and R. Andrew Hoff’s joint exhibition, Carnival Nights, is a photographic montage featuring edgy, moody, somber or surreal images of county fairs and community festivals in four states taken over the course of three years. Hoff and Commings state, “The facial expressions, postures and attitudes show the tedium of carnival life as the evening lingers on. There are multiple stories in these images left to the imagination.”

Commings is a photographer from Harrisburg, PA. She considers herself a street/documentary photographer although she tackles other subjects when the spirit or opportunity moves her.

Hoff started photography in college. He has a degree in Communications-Journalism and resides in York County, Pennsylvania.

In Observation - Light, Susan Iverson’s tapestries attempt to capture the strong emotions connected to fleeting moments of ocular pleasure. She is attracted to the transitory nature of atmospheric color, especially at dawn and dusk, when magical moments of intense color are experienced and remembered, but seldom in their fullness.

Iverson lives and weaves at her studio in rural Virginia near the small town of Montpelier.  She is Professor Emerita at Virginia Commonwealth University in Richmond.

During the July-August show, an exhibit of fine art produced by members of the gallery will also be on display, illustrating the range and diversity of Artspace's artist membership. 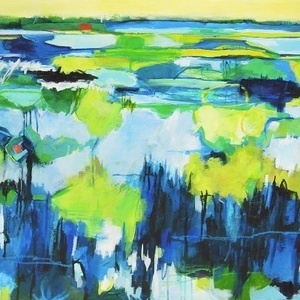