"I am a psychic and I'm a fraud," the words of pseudo-psychic Dr. Faustus.  None could be more fitting for this show.  James Mollenkamp has studied under the greatest magicians of our time as well as in back rooms with cons, frauds, and jokesters.  He deceives in the most entertaining way possible.  The show is 100% audience participatory and engaging and bound to please.  He uses the five senses to create the illusion of a sixth.  This is the art of DECEPTION.

James Mollenkamp has performed from California's bay area to the streets of London.  Having studied with many of magic's greats as well as with frauds, cons, cheats, charlatans, and pranksters alike.  James Mollenkamp is more than a magician.  His combination of these techniques and ways of thinking has made him an avant-garde of the field today. 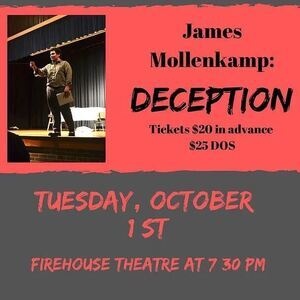