The Perkinson Center and Pearl St Comedy are proud to present "Galentines Day", a Ladies Night comedy special! Join us at 8:30pm for comedians Apple Brown Betty, Patrice DeVeaux, Kim Villamera, Leila Youmans and Liz Barlow!  It will be a night full of feminine fun!

Apple Brown Betty is a Richmond native who believes that laughter is medicine. She is poised but provocative, with a comedic style that engages the audience as extended family. Betty’s ideal man knows all the words to Zoom by The Commodores AND Zoom by Lil’ Boosie. Her hobbies include regretting the late 90’s and scheming ways to withdraw money from her 401K.

Patrice DeVeaux Is An Emerging Force & Rising Star From Richmond Virginia. Patrice Has Been Traveling Doing Standup All Over The Country. She Is A Writer, Producer And Creative Curator. She Has Appeared On Several Television Shows Including News One Now With Roland Martin, Kill Tony & Revolt TV. She has also been featured on Kenan Thompson’s Ultimate Comedy Experience. Patrice Has A Comedy Album Available On All Streaming Platforms, Titled “No Laugh Tracks Vol. 1” An Uncut & Gritty Introduction To Her Comedy Voice. Miss Deveaux Is Currently Writing For Several Independent Projects.

Kim Villamera is an up and coming DMV Comedian. She has performed at venues such as the Coalition Theater, the Virginia Beach and Richmond Funny Bone Comedy Clubs. She is the first Asian Woman to ever win the Virginia Beach Comedy Roast Championship. Born in the Philippines and home grown in Richmond,

her comedic style of storytelling is rich with social awkwardness and truly a testament of the human experience.

Leila Youmans is a standup from Chesterfield and thrilled to be doing comedy so literally close to home. Her day job is teaching and she tries to see the humor in the chaos surrounding her and is here to remind you your life could be worse.

Liz Barlow is a stand-up comic and writer from Virginia Beach,VA. She's a VA funny bone favorite and has been seen on several stages up and down the east coast. 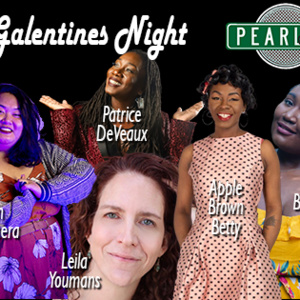 Approaching via Chesterfield
Take I-288 eastbound. Take the VA-145/Chester Rd exit and continue on Chester Road for 2.6 miles to VA-10 W/W Hundred Rd. Turn Right on W Hundred Rd and drive for 0.3 miles then turn right onto Centre Street just past Walgreens. The Perkinson Center is on the left after the Chester Library.

Approaching via Richmond
Take I-95 southbound. Take exit 61 B to merge onto VA-10 W/W Hundred Rd toward Chester. Drive 2.7 miles then turn right onto Centre Street just past Walgreens. The Perkinson Center is on the left after the Chester Library.

Approaching via Petersburg
Take I-95 northbound to exit 61 B. Merge onto VA-10 W/W Hundred Rd toward Chester. Drive 2.7 miles then turn right onto Centre Street just past Walgreens. The Perkinson Center is on the left after the Chester Library.