In Gothic Arches, Latin Crosses: Anti-Catholicism and American Church Designs in the Nineteenth Century, Ryan K. Smith sheds light on the intersection of the Gothic Revival movement and anti-Catholicism in nineteenth-century America by arguing that rising tensions led Protestant churches to break with tradition and adopt Latin art. Dr. Smith demonstrates the extent to which artistic and architectural features allowed Protestants to lessen the potent Catholic “threat” while simultaneously adapting to America’s new commercialization.

Ryan K. Smith received a Ph.D. in American civilization from the University of Delaware and an M.A. in history from the College of William and Mary. Today Dr. Smith specializes in material culture, historic preservation, and American religious history. Although a professor of History at Virginia Commonwealth University, Dr. Smith also has expertise in public history, having worked at the Winterthur Museum, the Library of Virginia, the Castillo de San Marcos National Monument, and the St. Augustine Historical Society, among other institutions. His most recent book, Death and Rebirth in a Souther City: Richmond’s Historic Cemeteries (Johns Hopkins University Press, 2020), analyzes the burial grounds of Richmond, Virginia, through the lens of race by charting more than a dozen burial grounds as modern reclamation efforts point to a redefinition of Confederate memory as the symbol and center of the South.

Group & Artist
The Branch Musuem of Architecture and Design
Hashtag 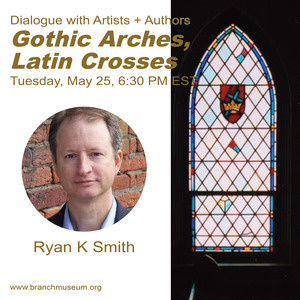