In art, negative space refers to the “empty” space around and between the subject(s) of a composition. While the negative space carries no defining details in and of itself, the edges of the subject paired with the use of high contrast can accentuate areas of an image, allowing the viewer’s mind to fill in “missing” information. Working in conjunction with positive space, negative space builds balance within a composition, creating an activated layout that avoids overwhelming the eye.

The works in Deep Parts employ negative space in vary degrees to varying effect. In many cases, the works utilize negative space to define forms, create illusions of depth, and emphasize focal points. Certain pieces use negative space to create a sense of rhythm, drawing our eyes and bodies into the composition. At other turns, negative space is invoked to communicate nuanced conceptual considerations, such as notions of loss or longing, or a questioning of the functionality of borders and boundaries.

Deep Parts seeks to draw visitors into a curious and reflective state. Works predominately employing high-contrast black-and-white compositions are juxtaposed with pieces engaging saturated palettes of red and yellow, creating a visual rhythm punctuated by points of emphasis within the exhibition design. Featuring artworks from the 1960s to today, Deep Parts endeavors to highlight negative space as a fundamental aspect of art making, showcasing myriad applications of the principle, and inviting viewers to consider the information and energy inherent in open areas.

Free and Open to the Public! 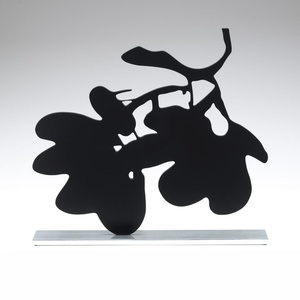