His Hideous Heart with Lamar Giles and Fran Wilde

Edgar Allan Poe may be more than a hundred and fifty years beyond this world, but the themes of his beloved works have much in common with modern young adult fiction. Whether the stories are familiar to readers or discovered for the first time, readers will revel in Edgar Allan Poe's classic tales, and how they've been brought to life in 13 unique and unforgettable ways.

Lamar Giles is a well-published author and a founding member of We Need Diverse Books. Lamar has two novels forthcoming in 2019: his debut middle grade fantasy THE LAST LAST-DAY-OF-SUMMER (Versify / HMH) and his fourth YA thriller SPIN (Scholastic).

Fran Wilde’s novels and short stories have been finalists for four Nebula Awards, a World Fantasy Award, and two Hugo Awards, and include her Nebula- and Compton-Crook-winning debut novel Updraft, its sequels Cloudbound, and Horizon, her 2019 debut Middle Grade novel Riverland, and the Nebula-, Hugo-, and Locus-nominated novelette The Jewel and Her Lapidary. Her short stories appear in Asimov’s, Tor.com, Beneath Ceaseless Skies, Shimmer, Nature, and the 2017 Year’s Best Dark Fantasy and Horror. (Bibliography.) 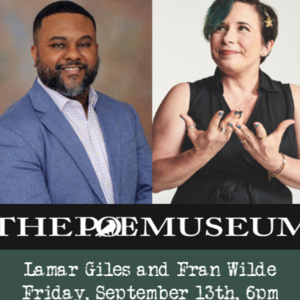