The works in this series are about being outcast and made to feel different. In order to fit in any of the many "categories" society has forced us to all feel as though we must fit into or are "socially acceptable," otherwise you are forced with options that leave you feeling invalidated or insignificant.

Throughout one’s life, as we begin the journey into just the basic points of survival, we are all faced with that one thing, the "application," which always asks one to categorize themselves racially and ethnically. If you are not a person that fits into what is considered the "norm," you must check the box that says, "other." Growing up you may wonder why people seemingly accept you, yet you never feel as though they are genuine and you realize you are left out of many things and being very much out-casted because you are just not quite enough "of the norm" to actually be considered as a whole. Many times name calling and bullying is part of daily life, with many of those names to include animal names, like "zebra."  You may even begin to pretend to be what you know will make you "acceptable" and "enough" in order to be "considered" and included. Many do not even realize how they socially invalidate and shut out "other" people if they are not enough to fit within their own accepted "categorization," even if not intentionally but subconsciously they do it without even being aware of how invalidating it is to the "others";  quick, to judge, stereotype, etc, without realizing how their actions affect "others."

Social media has a lot to blame for the continuance of this behavior with stereotypical portrayals in order to try and define humans and categorize and separate us all.

I believe the continued use of "human categorization" needs to end. We are all human, we are all one race, the human race.  Ethnicity, race, religious beliefs or not,  sexuality, etc. do not make one less human or significant than another.

In this series in some of the works I have used animal heads as a form of symbolism, some with human features, in colors that are not of the "norm" and as "unrealistic" as society has stereotyped the "others" to be made to feel.

"Just too much of everything, but not enough of anything to be considered for something." 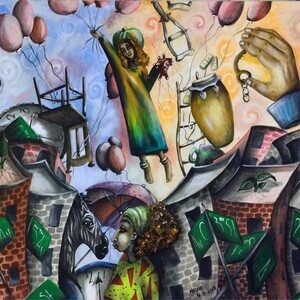