It was a sold-out hit at the Peale Museum in Baltimore, and in Richmond this fall!  Now Richmond audiences have A SECOND CHANCE to experience this unique performance that’s unlike anything you’ve seen before.

Bring Barnum and his cast of characters back to life!

*along with reproductions, facsimiles, fakes, frauds, and completely fabricated items.

David London is a storyteller and magician who creates and presents original interactive magical experiences.

He’s staged six original theatrical magic productions including Magic Outside The Box, The Adventure to the Imagi Nation, Cerebral Sorcery, and Art of Dreams. London has authored eight manuscripts related to magic and illusion including Daydreams, Borderland State, and Imagining the Imagination. He regularly presents his performances, talks, workshops, and seances at theaters, museums, galleries, and festivals across the United States. 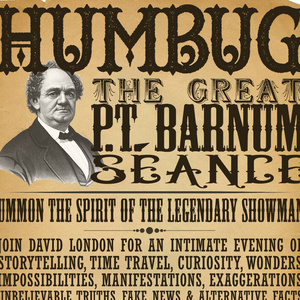