The show will feature photography and a short film by Jordan Shanks. The Virginia native and Howard University graduate has traveled the country documenting the ongoing struggle for racial justice and his generation’s response.

“Love Letters to America Part II” is a series of striking portraits taken by Jordan Shanks in Ferguson, Baltimore, New York and Richmond amidst social uprisings of the last few years. The exhibition will also premiere his new short film Never Again, which examines the call to remove Richmond’s myriad monuments to Confederate war personnel. 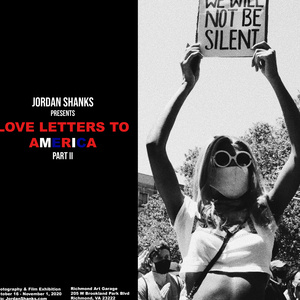