The funniest, most popular kid in school, Charles Aubrey Rogers suffered from depression and later addiction, then ultimately died by suicide.  Diary of a Broken Mind focuses on the relatable story of what lead to his suicide at age twenty and answers the “why” behind his addiction and this cause of death, revealed through both a mother’s story and years of Charles’ published and unpublished song lyrics. The closing chapters focus on hope and healing—and how the author found her purpose and forgave herself.

ANNE MOSS ROGERS is a writer, owner of the blog, Emotionally Naked, and professional speaker who captures hearts and fills them with hope. Since 2010, she has been a board member at Beacon Tree Foundation and an advocate for youth mental health.

CHARLES ROGERS was born April 26, 1995, and died by suicide, as a result of depression and addiction, on June 5, 2015. He loved dogs, funky socks, drama, writing, performing rap, and making people laugh. But most of all, he loved and cared about people. 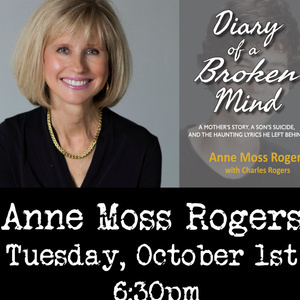