Film Documentary, Paris to Pittsburgh is a 2018 documentary film about climate change directed by National Geographic filmmaker Sidney Beaumont and documentarian Michael Bonfiglio and produced by Bloomberg Philanthropies, National Geographic and RadicalMedia. The film is narrated by Rachel Brosnahan and runs 77 minutes. 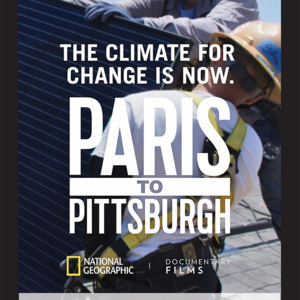