Mark Nizer 4D: A New Dimension in Entertainment is a combination of original comedy, world-class juggling, movement, music and technology that promises to be a spell-binding evening. Whether juggling laser beams at 1000 rpms, throwing five ping pong balls 20 feet in the air using only his mouth, or even juggling a burning propane tank, a running electric carving knife and a 16-pound bowling ball, you'll discover for yourself that Mark Nizer is truly “the juggler your mother warned you about.” Or if she didn't, she should have! Guaranteed fun for the whole family!

“He just keeps getting better and I didn’t think that was possible.” Mark Nizer is a world champion juggler who doesn’t stop at the ordinary!

Endowment for the Arts.

Free for children 2 and under 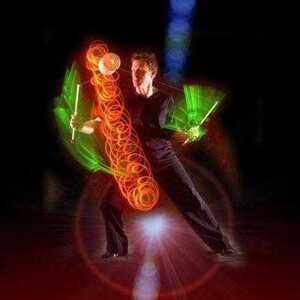