Join us in Quirk's Main Gallery on Thursday, April 4 for the opening reception of Aggie Zed's solo exhibition, "The Outskirts of Witchama-Milkee."Aggie's newest sculptures will be complimented by drawings and paintings, the subjects of which are the inhabitants of the imagined town of Witchama-Milkee and its surrounding areas.

And what is Witchama-Milkee, you ask? It’s a where. A place. And I’m not completely sure what’s there. I’ve only been to the outskirts. That’s usually where you find the stuff the people who live there throw away. Like their milk jugs.

I have great affection for these people, but they just won’t stand up on their own. I decided to give them little rods and poles so they could stay standing and so you could see some of their nice clothes. And sometimes see right through their clothes---the plastic things. Those were milk jugs. Everybody is talking about plastic, how bad it is. And how it will never go away. I thought I could make it be clothes.I love the way you can see through them, but not exactly. Not explicitly. So if the person only has legs and a head, and he’s wearing his clothes, you can kind of imagine there’s some more to him. It’s funny how people are the animals who have to wear clothes.

A native of Charleston, South Carolina, Aggie Zed moved to Richmond, Virginia after graduating from The University of South Carolina. She has exhibited her work nationally in solo and group exhibitions Her solo show, Keeper’s Keep, traveled to museums and galleries in the Southeast including the Taubman Museum in Roanoke, VA as well as the Visual Arts Center of Richmond. Aggie's drawings and paintings are informed by a lifelong celebration of the beauty and strangeness of dreams posed against the absurdity and poignancy of supposedly rational human activity. She currently lives and works in Gordonsville, Virginia.

Aggie Zed's opening reception will be held in the Main Gallery from 5-8 pm on Thursday, April 4. Aggie will offer a brief artist talk around 6:30 pm. 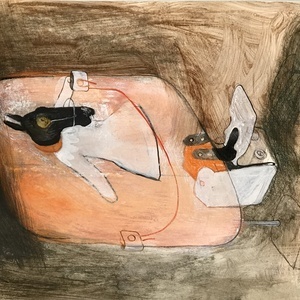