Known for intimate celebrity encounters, the Richmond Tattoo, Art & Music Festival will open its doors for the 27th year this September. More than 150 local and internationally known tattoo artists will tattoo guests, including:

Jesse Smith of Loose Screw Tattoo (Richmond, VA) and Kenny Brown co-owner of Jack Brown’s Tattoo Revival (Fredericksburg, VA) are leading the recruitment of artists and entertainment for one the oldest tattoo conventions in the world. Other local artists include:

The festival will also draw in a global arts community. They’ll converge to create and auction items for the Live Arts for Charity event. In addition, Smith will host a two-day line up of artists during the 2nd Annual Richmond Tattoo and Arts Academy. Eight experts from the tattoo industry and fine arts world will lead courses for tattoo artists and other artists. Artists from this year’s festival include:

Matt Lively: Returning for a second year, the Richmond-based artist will create a piece for the Live Art event.

Sterling Hundley: The prolific illustrator has created for Rolling Stone, Marvel, the Grammys, GQ, the New Yorker, Red Bull, and Major League Baseball.  The Richmond local and VCU alumni will discuss the evolutionary process of art.

Esao Andrews: The painter is known for his surreal artwork for the band Circa Survive and DC Vertigo Comics. He’ll lead a course on finding your artistic voice during the Academy and create a Live Art piece for auction.

Pablo Fontagnieir: Known as “Hombre SUK,” Pablo is a graffiti artist and illustrator based in Nuremberg, Germany. He’ll create a Live Art piece.

Other notable moments throughout the weekend: 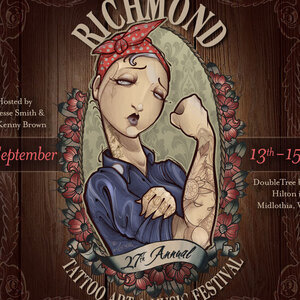