Space Opera with a Twist! Neon Yang in Person at Fountain!

Neon will be in person at the store to talk about their new book!

An immersive, electrifying space-fantasy, Neon Yang's debut novel The Genesis of Misery is full of high-tech space battles and political machinations, starring a queer and diverse array of pilots, princesses, and prophetic heirs.

It’s an old, familiar story: a young person hears the voice of an angel saying they have been chosen as a warrior to lead their people to victory in a holy war.

But Misery Nomaki (she/they) knows they are a fraud.

Raised on a remote moon colony, they don’t believe in any kind of god. Their angel is a delusion, brought on by hereditary space exposure. Yet their survival banks on mastering the holy mech they are supposedly destined for, and convincing the Emperor of the Faithful that they are the real deal.

The deeper they get into their charade, however, the more they start to doubt their convictions. What if this, all of it, is real?

A reimagining of Joan of Arc’s story given a space opera, giant robot twist, the Nullvoid Chronicles is a story about the nature of truth, the power of belief, and the interplay of both in the stories we tell ourselves.

NEON YANG (they/them) is a queer non-binary author from Singapore. They have been nominated for the Hugo, Nebula, World Fantasy, Lambda Literary, Ignyte, and Locus Awards, and their work has been an Otherwise Award Honoree. They are the author of the Tensorate series of novellas from Tor.com Publishing. In previous incarnations, Neon was a molecular biologist, a science communicator, a writer for animation, games and comic studios, and a journalist for one of Singapore's major papers. 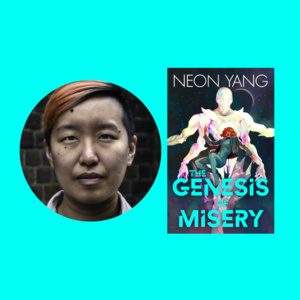