Starry Night Cinema: A Raisin in the Sun

Join us under the stars (and a full moon) in the ICA’s Thinking Field for the big-screen presentation of the 1961 film A Raisin in the Sun. Presented by our partners at the Afrikana Independent Film Festival, the ICA is excited to screen this cinematic classic on the heels of its 60th anniversary.

Written and adapted by Lorraine Hansberry, the first Black woman to have a play featured on Broadway, the film follows the Youngers, a Black family from South Side Chicago that is grappling with how to best use a large sum of money left by the family’s recently deceased patriarch. Starring Sidney Poitier, Ruby Dee, and Claudia McNeil, both the stage and screen adaptations received critical and universal acclaim, securing Best Play at The New York Drama Critics’ Circle (1959) and multiple nominations at Cannes Film Festival, BAFTA, and The Golden Globes (1961). A Raisin in the Sun is a part of the Library of Congress’s National Film Registry and the Criterion Collection. 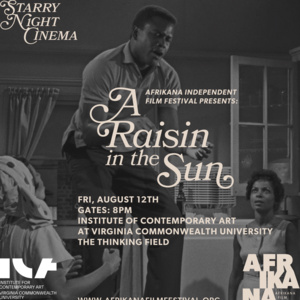