The Chisholm Kid, Lone Fighter for Justice for All

The Chisholm Kid, Lone Fighter for Justice for All pays homage to the many black cowboys who drove longhorns up the Chisholm Trail out of Texas and across Indian Territory to the railroad trailheads in Kansas during the years following the Civil War. Once freedom arrived, many freedmen found work as cowboys and applied their skills and experiences learned when they were slaves to earning a living on the back of a horse. While no definitive numbers exist, it’s estimated that at least 25 percent of all cowboys on the trail during this period were African American.

The Chisholm Kid exhibition features panels from the trailblazing color comic strip of the same name that ran in the early 1950s in the Pittsburgh Courier, one of the nation’s pre-eminent African American newspapers. The Chisholm Kid is both historically and culturally significant due to the strip’s hero, the Chisholm Kid, being presented as a positive force for good at a time when so many images of African Americans in all forms of popular culture reflected negative stereotypes. These positive depictions of a black hero positioned The Chisholm Kid as an equal to his white Western comic strip contemporaries, Hopalong Cassidy and The Lone Ranger. 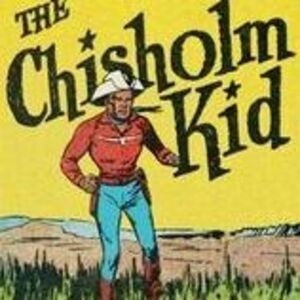