GODFREY TOWNSEND is the new guitarist for the Yardbirds. A favorite in the Classic Rock World, Godfrey has played with a range of greats from John Entwistle to Jack Bruce.

Godfrey’s plays guitar, keyboards, sings, and is the music director of countless live performers, most notably his own “Clapton is God-frey” show and the Happy Together tour.

A favorite in New York City’s Max’s Kansas City and the China Club scenes, Godfrey’s been the guy that got famous rockers on stage to jam with the bands. After a stint in Las Vegas working with Mitch Ryder, Spencer Davis, and Joey Molland of Badfinger, he was recruited by John Entwistle of The Who, with whom he performed a half dozen tours, a studio album, and a live album. Godfrey went on to play with Alan Parsons, Todd Rundgren, Ann Wilson of Heart, Jack Bruce, Mark Farner, Christopher Cross, Flo and Eddie, and Dave Mason.
Since the Yardbirds’ birth from 1963 to 1968, and then its 2003 reformation, the group has been known for its incredible guitarists. In addition to Eric Clapton, Jeff Beck and Jimmy Page, plus rhythm guitarist/bassist Chris Dreja have contributed to the band’s history.
Jim McCarty continues to lead this innovative British rock band that provides the crucial link between British R&B, Psychedelic Rock, and Heavy Metal, while pioneering the use of innovations like fuzztone, feedback and distortion. The drummer/singer/songwriter is responsible for its haunting sound.

The Yardbirds are exclusively represented TCI (Talent Consultants International) for booking concerts. Stay tuned for an announcement soon of U.S. Tour dates for this November.

Goldmine Magazine stated, “the band’s hallmark of top-notch musicianship remains. There are no passengers in this band.” 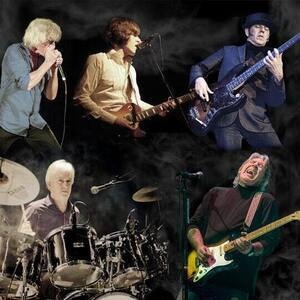