Painter, arts educator and percussionist, Orisegun Olomidun opens a new exhibition in Elegba Folklore Society’s Cultural Center on October 5, 2018 entitled, unVeiled Essence.  The show, which features one and two dimensional acrylic gridding on canvases, will run will run through November 30.  The public is invited to attend the opening reception on October 5,  5p - 9p, and enjoy live music and refreshments as a part of the 1st Fridays ArtWalk.  The Society’s Cultural Center is located in the downtown Richmond Arts District at 101 E. Broad Street at the corner of 1st and Broad.

Olomidun says, “My intent is to create art that exhibits energy, intensity and integrity which transforms the environment in which it is placed, performed and experienced –- connecting to an expanding consciousness.   My belief is that art should always be alive; constantly inspiring its audience to re-examine the reality around them and experience the visual arts, not merely as tangible objects, but also as ideas manifested in a physical form.”  Some of the works incorporate reclaimed materials while others show a superimposition of the same.   In so doing, the artist says that the work “speaks back, beckoning the dormancy within each of us to be awakened, revealed, exposed.”

A graduate of the University of Cincinnati College of Design, Architecture and Art, Olomidun holds a Bachelor of Fine Arts and a Master of Arts from the Columbia College of Chicago’s Center for Book and Paper Arts.  He has exhibited widely in multiple states in both solo and group shows, and he had been an artist-in-residence in a long list of schools, educational institutes and museums over three decades. 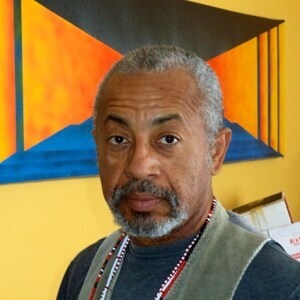