War in Pieces/Work in Progress

WAR IN PIECES / WORKS IN PROCESS

​Join dramaturg David Robbins in conversations with the four military veterans who wrote one-act plays that were to receive their world premieres as part of Firehouse’s WAR IN PIECES festival in September 2020, but had to be postponed due to the pandemic until the fall of 2021.

​The conversations will be live at Firehouse for an audience of 6 people and will also be live streamed.

The playwrights will talk about their experiences writing the plays in Robbins’ Mighty Pen Project at the Virginia War Memorial, as well as the real-life events that inspired their plays. You’ll get an insider’s view of the process of writing and developing a script, and also get to know four extraordinary veterans. Each WIP conversation will include a Q&A period from the live and remote audience members.

ROBERT WALDRUFF is a retired Marine Captain who served in Vietnam with the fabled Dark Horse Battalion, 3rd Battalion, 5th Marine Regiment, was critically wounded and medivaced at night during an operation in the notorious Arizona Territory of the An Hoa Basin, and decorated for valor. For over forty years he consulted on tax, accounting, and finance matters with large and small businesses in Washington, DC and Richmond, Virginia.  He holds a B.S. in Commerce from the University of Virginia and an MBA in Finance from the University of Chicago. He was named by the SBA as Accountant Advocate of the Year for the Commonwealth of Virginia. He can be found most days with his wife of 50 years seeking sanctuary with their herd of bison at Annie Oaks Farm in Southside, Virginia.

CHARLES “CHUCK” WILLIAMSON (Playwright) is a lifelong Richmond native. He left active service with the Army in 2017, serving most recently with 10th Mountain Division. He is currently a student at the College of William and Mary.

RACHEL LANDSEE served on active duty in the US Army Judge Advocate General’s Corps from 2006-2014, with continued service in the US Army Reserve through 2018, separating as a Major. She deployed to Iraq in 2008 with the XVIII Airborne Corps as an operational and international law attorney, and then again in 2008-2009 with the 44th Medical Command as a trial counsel. She finished her active duty career at the US Army Legal Services Agency, where she worked in conjunction with the Department of Justice to defend military personnel and policy decisions. She is a graduate of the University of Wisconsin and Seattle University School of Law. She lives in Richmond, Virginia with her husband Adam, also an Army veteran, and their two children. She is ecstatic to have fallen into Richmond’s vibrant arts culture.

DAVID M. ALDRIDGE was born in 1946 in Cape Girardeau, Missouri and was drafted into the Army in 1965. He served in Viet Nam from 1966 and was honorably discharged in 1967. He re-enlisted in 1968 and served in Viet Nam from 1968 to 1969, and again in 1970 to 1971. He received the Combat Infantry Award, Purple Heart with two Oak Leaf Clusters, Bronze Star with “V” Device with two Oak Leaf Clusters, Army Commendation Medal with “V” Device with three Oak Leaf Clusters, Air Medal, Vietnamese Cross of Gallantry with Gold Palm Award (Individual Award), Meritorious Service Medal, and ten other awards. Dave attended University of Maryland, European Campus, Neu Ulm, Germany 1973 to 1976, and graduated from the Army Management Staff College, Fort Belvoir, Virginia December 2002. He worked as a Department of the Army Civilian from 1988 and retired in 2010.

David L. Robbins, dramaturg/moderator began writing fiction in 1997 and has published fifteen novels, many of which have appeared on The New York Times bestsellers list. He is also an award-winning screenwriter and essayist. As a playwright, David has had multiple staged productions including THE END OF WAR at Virginia Rep, which received a grant from the National Endowment for the Arts, and THE KING OF CRIMES produced by 5th Wall Theatre, about the Aaron Burr treason trial, which was filmed by public television and selected for national distribution. David is the founder of James River Writers, co-founder of the Podium Foundation which supports the practice of writing for Richmond area youth, and creator of The Mighty Pen Project that helps Virginia veterans and first responders turn their stories of service into written narratives. The Virginia Commission for the Arts named David one of the two Most Influential Literary Artists in the state for the last 50 years.

Pay what you will 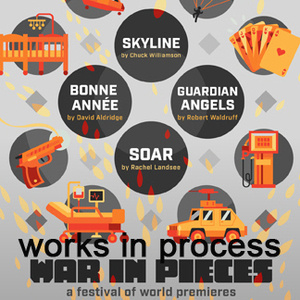