The enfant terribles who brought you One in Four are back with Wrong Chopped, an experimental, dada parody of the Food Network’s hit series, regular Chopped. Four chefs vie for the title of Chopped Champion and must contend with baffling secret ingredients, a host who may or may not be a dimension-devouring Eldritch God, and an utter lack of narrative convention. Come for the laughs, stay for the thrills, and who knows—you just might learn a little something along the way (you definitely won’t).

DOG STUFF-- a new theatre company that puts the “FUN” in “prodUciNg original experimental comedies (F).” We create and share plays whose convention-bucking aesthetics and accessibility attract the theatrically-averse, invigorate audiences, and showcase the vitality of the medium. Or maybe we’ll just do Glengarry Glen Ross a bunch or something, who knows.
www.facebook.com/DOGSTUFFOFFICIAL 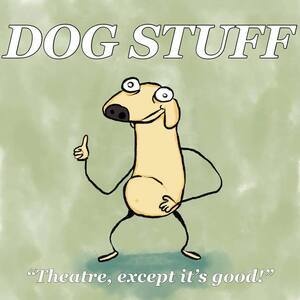