WRONG CHOPPED is a senseless Dada comedy that was workshopped at Firehouse in November, 2018. The new play happens to share a few qualities with the Food Network’s hit reality competition series "Chopped." By “share[s] a few qualities with” we mean enough to keep you grounded but not so many that you may start to wonder if this is legally distinct from "Chopped" or not. Because it totally is legally distinct from the hit reality T.V. show.

Join a cadre of confounding chefs and a jury of jejune jurors as the battle for the title of Chopped Champion rages. WRONG CHOPPED will best-case-scenario ASTOUND and worst-case-scenario make you say I KIND OF DON’T GET WHAT THEY WERE GOING FOR WITH THIS. Pre-recorded video! An obliterated fourth wall! A note in the program that will likely beg you to get drunk before you watch this!

WRONG CHOPPED is sprung from the minds of Richmond favorites Dixon Cashwell (TheatreLab’s DRY LAND; Quill’s COMPLEAT WRKS) and Levi Meerovich (RTCC Award Winner: Firehouse Theatre’s PRELUDES; writer of ONE IN FOUR, a Best of Capital Fringe production), and is the inaugural show from their new theatre company DOG STUFF. 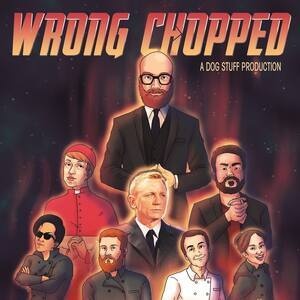